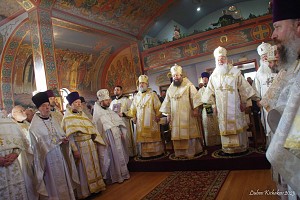 On Monday, January 9, His Eminence Nicholas, Metropolitan of Eastern American & New York, paid his first official visit following his election as First Hierarch of the Russian Church Abroad to the Mid-American Diocese. His Eminence accompanied the wonderworking Kursk Root Icon of the Mother of God on his visit, to the joy of the local faithful.

Metropolitan Nicholas celebrated Divine Liturgy in Holy Protection Diocesan Cathedral in Des Plaines, IL, co-served by: Archbishop Peter of Chicago & Mid-America, Archbishop Daniel of Chicago & the Midwest of the Orthodox Church in America, Bishop Longin of the Diocese of New Gracanica & Midwestern America of the Serbian Orthodox Church, and a large number of local and visiting clergy:

Praying in the altar and partaking of Holy Communion were Archpriest Andre Papkov and Deacon Alexander Tikhonow (clerics of Holy Protection Diocesan Cathedral).

After the Great Entrance, Deacon Gregory Finlon was ordained to the priesthood for service at St. Innocent Church in Wheaton, IL. At his ordination, he was given the name Michael, his name conferred upon him by his parents, and which he held before converting to Orthodox Christianity many years ago. Archbishop Peter noted that this is not the first time he has been asked to restore a name at ordination to a clergyman given to him by his parents before conversion to Orthodoxy, and His Eminence expressed again his desire that priests of the Mid-American Diocese not give new names to converts who come to the Church with perfectly suitable Christian names.

Following Liturgy, at which almost everyone in the packed cathedral partook of Holy Communion, a reception for the gathered clerics and their guests was offered. At the banquet, both Metropolitan Nicholas and Archbishop Peter thanked the deacons of our Church for their dedicated service. Archbishop Peter announced that this gathering would be an annual one at the Diocesan Cathedral, and invited all those present to participate in the celebration again next year on January 9, 2024. His Eminence also urged those who were not able to attend this year to arrange to take this day off from work next year, so that even more of diocesan deacons might participate in this pleasant ‒ and now annual ‒ celebration. 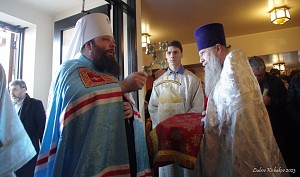