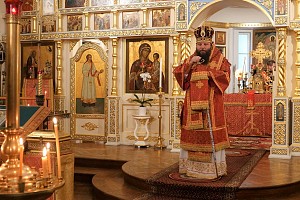 On October 2, the 16th Sunday after Pentecost, that after the Exaltation, Metropolitan Nicholas of Eastern America & New York celebrated Divine Liturgy in the Synodal Cathedral of the Sign in New York City. Serving alongside the First Hierarch of the Russian Church Abroad were cathedral dean Archpriest Andrei Sommer and Protodeacon Nicolas Mokhoff (cathedral cleric). Praying in church and receiving the confessions of the faithful was Archbishop Gabriel of Montreal & Canada.

The Synodal choir sang beautifully at Liturgy under the direction of conductor Vadim S. Gan. Praying in church were parishioners of the cathedral and other churches, most of whom communed of Christ’s Holy Mysteries.

Upon completion of the service, Metropolitan Nicholas, Archbishop Gabriel, and the clergy served a short moleben before the Cross, which had been placed on the central analogion.

The First Hierarch greeted those present with the ongoing feast and addressed the faithful with a sermon on the day’s Gospel reading – on the talents – in which he said, in part:

"The master, the lord, returned, and demanded of his servants an accounting of how they had used the talents he had entrusted to them. The one who received five talents was able to obtain five talents more; the one who received two was also able to multiply these and receive another two talents. They thanked their lord and used their talents for good. But the one who had received one talent came and began to offend his lord with trickery and deceit. He buried the one talent in the ground and now returned it: he received it ungratefully and returned it ungratefully. The lord showed mercy to the two servants, but was angry with the third, and punished him.

"The spiritual meaning of this parable is that the lord, the owner, is the Lord God. We are his servants, and He gives to each what we need for salvation, most importantly – our life, our soul. And how do we thank God? How do we use our time on the earth? How do we adown our souls with the virtues, with prayer, with ascetic labors? How have we fulfilled God’s commandments?.. God is love. He invites each to save his soul, gives talents to each, sufficient for the salvation of his soul."

Metropolitan Nicholas called on the faithful "with humility and obedience to bear life’s cross and, multiplying with the virtues the grace given us by God, to use these talents for the salvation of our soul and the souls of the people around us."

The sisterhood prepared a traditional Sunday luncheon for the clergy and parishioners in the church hall. 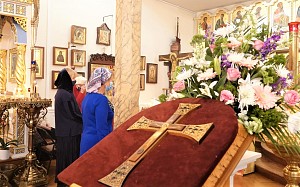