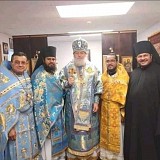 Without a doubt, the praxis of silence is a divine gift that improves man’s spirituality, and even more so in the monastic path.

I remember meeting our beloved father and apostle, Vladyka Hilarion ‒ a man of kind countenance, quiet spirit, and plain words that he expressed with fatherly affection. His simplicity and spiritual purity immediately made an impact on me.

Because of my path toward the priestly grace that was unworthily awarded to me, a sinner, I greeted him reverently, and almost immediately he said, "Daniel, I was waiting for you." His short words, yet with great spiritual depth, filled me with a great calm and filial experience. His spirit was aimed at the exemplary effort of the Gospel without words, without exaggerated speech or impressive terms. His spiritual role, and as a bishop, appeared to me as the "servant of others."

He celebrated Liturgy with great import, and it seemed like "it was no longer him," but someone illuminated by the Holy Mysteries. He has given us an example of tireless mission, so much so that he has deigned to appoint two priests for the ROCOR Orthodox Mission in Nicaragua and to be attentive to this path.

I remember clearly that at the end of Liturgy (which included the rite of elevation to priestly rank), with the utmost humility and express affection he said to me, "I brought this for you," and gave me a blessing cross and a holy relic of St. John of Shanghai, who will be the guardian of this mission in Matagalpa, Nicaragua. It was almost like an express mandate to expand the missionary path in Central America by the intercession of this holy man of God, St. John.

And our beloved hierarch ‒ in small acts and the praxis of faith – has silently preached Jesus ​​Christ, crucified and risen from the dead, Who redeemed us from sin, the curse, and death. He has given us a mission path where we are in the vanguard of the battle waged in three worlds: the world of God, the world of men, and our own will. As a monk, Vladyka has been a special forces soldier of Holy Orthodoxy by his ceaseless prayers for this Nicaraguan mission, in order to prepare us for the attack beyond the borders of the Church.

Memory Eternal to our beloved hierarch!

Translated from the original Spanish by Archpriest Peter Jackson.