Washington, DC: "The Mother of God visited and comforted us!" 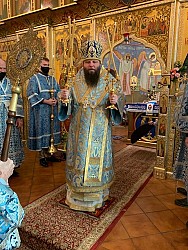 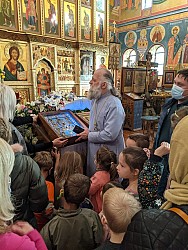 With the blessing of His Eminence Hilarion, Metropolitan of Eastern America & New York, First Hierarch of the Russian Church Abroad, the Thanksgiving holiday and the week following have become the traditional visitation period of the Greater Washington area by the Protectress of the Russian Diaspora – the wonderworking Kursk Root Icon of the Mother of God.

Parishioners of St. John the Baptist Cathedral in Washington, DC prepared for the eighth annual visit of the Kursk Icon with nervous anticipation. The church was cleaned and the center analogia adorned with flowers in preparation for the image’s arrival.

The wonderworking image was brought by His Grace Nicholas, Bishop of Manhattan, guardian of the precious sacred icon. On Wednesday evening, November 24 (the day of the appearance of the "Montreal" myrrh-streaming Iveron Icon of the Mother God), His Grace visited Holy Transfiguration Church in Baltimore, MD, where he served a moleben and akathist. He arrived in the capital late that night.

On Thursday morning, November 25, the wonderful American holiday of Thanksgiving, many parishioners and worshippers from nearby cities gathered in St. John the Baptist Cathedral to greet and pray before the Protectress of the Russian Diaspora. After the thanksgiving moleben, Bishop Nicholas delivered a sermon on the meaning of the words of the Holy Apostle Paul: "Give thanks always for all things unto God and the Father in the name of our Lord Jesus Christ" (Ephesians 5:20.

On Friday, November 26, Bishop Nicholas and Archpriest Victor Potapov (cathedral rector and dean of the Capital Region) visited the Bulgarian community in Silver Spring, MD, where they served a moleben in Sts. Cyril & Methodius Chapel.

That evening, the wonderworking image was entrusted to Archpriest Nectarios Trevino, who traveled with it to his parish of St. Nina & the Holy Innocents in Bristow, VA, where the icon was eagerly awaited by parishioners.

That evening, Bishop Nicholas visited Holy Apostles Church in Beltsville, MD with the icon, where he officiated All-Night Vigil in the small church, which was overflowing with worshippers. With the blessing of Metropolitan Hilarion, parish cleric Priest Christopher Johnson was awarded the right to wear the kamilavka.

On Sunday, November 28, the first day of the Nativity Fast, the holy image was brought to St. John the Baptist Cathedral for the early English Liturgy.

Upon completion of the early Liturgy, to the triumphal peal of bells, Bishop Nicholas was greeted, after which he celebrated the later Slavonic Liturgy. At Liturgy, a multitude of people communed of Christ’s Holy Mysteries. His Grace dedicated his sermon to the subject of the Parable of the Good Samaritan, and the necessity of doing good to one’s neighbors (the sermon – in Russian – can be watched here).

The following two days were once more spent visiting sick and infirm parishioners.

On Wednesday, December 1, the Kursk Icon visited the St. Herman of Alaska parish in Stafford, VA, whose rector is His Eminence, Metropolitan Jonah (Paffhausen), former Primate of the Orthodox Church in America. Here the icon remained overnight.

On Thursday, December 2, the Protectress of the Russian Diaspora visited St. Thecla Parish in Kensington, MD, where the rector, Archpriest John Johnson, served a moleben and akathist to the Most Holy Theotokos.

The icon adorned St. John the Baptist Catehdral on the eve and the very day of the great feast of the Entry into the Temple of the Most Holy Theotokos. After the luncheon, at the start of a scout gathering for the SGPA Chapter "Putivl’", the young people gathered in the church to venerate the great sacred icon. Fr. Victor Potapov led a talk with them, in which he noted several important moments in the icon’s more than 700-year history.

On Sunday, December 5, farewell molebens were served after both Liturgies in St. John the Baptist Cathedral. In his sermon at the later Liturgy, Fr. Victor recalled how, in 2008, during the first visit of the Kursk Icon to Russia, the faithful stood patiently for hours in long lines in every kind of weather just for the chance to venerate the wonderworking image for but a moment. "And we have had the icon for an entire week! How endless grateful we must be to our Lord Jesus Christ for this mercy!" the rector said.

Worshippers remained in church for a long time, wishing to venerate the icon again and again.

Upon completion of the Sunday school, the children gathered in church for a talk with Fr. Victor, dedicated to the history and miracles of the Kursk Icon. The children showed a sincere interest and posed many questions.

On Wednesday, December 8, Fr. Victor and his Matushka Maria will take the sacred icon to the Cathedral of Our Lady of the Sign in New York City for the start of the meeting of the Synod of Bishops. 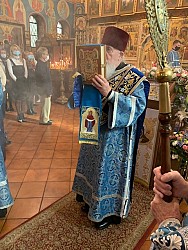