Parishioners of St. John the Baptist Cathedral in Washington, DC and faithful from other ROCOR communities near the capital were vouchsafed a great joy: for the first time in the 72-year history of the parish, founded in the American capital in 1949 by the Holy Hierarch John (Maximovitch), were the ancient (1295) Kursk Root Icon of the Mother of God and the contemporary (2007) myrrh-streaming Hawaiian-Iveron Icon of the Most Holy Theotokos received simultaneously.

Bishop Nicholas of Manhattan, guardian of the Kursk Icon, departed from New York to Boston on Thursday, August 26. On the way, His Grace made a stop in Baltimore, MD, in order to pray with the parishioners of Holy Transfiguration Church. Having served an akathist to the Mother of God here, Bishop Nicholas continued on to the Washington, where he was met by Archpriest Victor Potapov, dean of the Capital Region and cathedral rector.

On Friday, August 27, Bishop Nicholas officiated the All-Night Vigil in Holy Assumption Church in Stafford, VA, in the presence of the Kursk Icon, on the occasion of the parish’s patronal feast – the great feast of the Dormition. One year ago, the community, led by Priest John Trepatschko, returned from schism into the bosom of the Russian Church Abroad. The cozy Holy Assumption Church is a house chapel, organized and adorned thanks the labors of the two brothers: Priest John and Protodeacon Nicholas Trepatschko.

After Liturgy on Saturday, August 28, a meal was offered for all, during which the guests spoke informally with one another. Guests would have liked to spend more time interacting with the wonderful Trepatschko family, but it was time to leave the hospitable home and hurry to arrive for the beginning of Vigil at St. John the Baptist Cathedral.

Arriving in time for the beginning of the evening service in Washington was Deacon Nectarios Yangson, guardian of the myrrh-steaming Hawaiian-Iveron Icon of the Mother of God. Both icons – Hawaiian and Kursk – were greeted by cathedral clergy and a multitude of the faithful, who had come from near and far to pray before these two holy icons. Bishop Nicholas officiated at Vigil, joined by, in addition to cathedral clergy, Archpriest Nectarios Trevino (rector of Holy Innocents & St. Nina Church in Bristow, VA) and Archpriest Vasilije Vranic (rector of St. Luke Serbian Church in Potomac, MD). As always, the cathedral’s Slavonic and English choirs sang splendidly and prayerfully.

During Vigil, it was plain for everyone to see how the holy myrrh from the Hawaiian Icon overflowed its frame onto the cover of the analogion, leaving a wide mark on the cloth as a grace-filled reminder for parishioners of its visit.

On Sunday, August 29, both icons were brought to the church for the start of the early Liturgy, celebrated by cathedral cleric Archpriest David Pratt, co-served by Protodeacon Blagoje Siljegovic and Deacon John Dean. After Liturgy, a moleben was served before both wonderworking icons. Upon completion of the service, worshippers were anointed with holy myrrh and received paper copies of the Hawaiian and Kursk Icons, as well as a small piece of cotton soaked in myrrh.

After the Sunday English Liturgy, at 10:30 AM, the greeting of Bishop Nicholas took place, who celebrated the later Liturgy in the packed cathedral. Concelebrating with His Grace were Fr. Victor Potapov, Priest Alexander Resnikoff, Priest Sergei Kosov (rector of St. Joseph of Optina Church in Virginia Beach, VA), Protodeacon Leonid Mickle, and Deacon Gregory Trubetskoy.

The atmosphere in church was one of deep prayer. Virtually all those present communed of Christ’s Holy Mysteries. After the later Liturgy, a second moleben to the Mother of God was served.

Sunday, August 29, coincided with the 50th wedding anniversary of Fr. Victor and his Matushka Maria. After the Liturgy and moleben, Bishop Nicholas warmly congratulated Fr. Victor and Matushka with their golden wedding anniversary, and Fr. Nectarios Yangson presented Fr. Victor with a copy of the Hawaiian Icon in the cloth encasing that had covered the holy icon for several years. It was in this encasing several years ago that the Hawaiian Icon visited the Republic of Georgia, where hundreds of thousands of the faithful prayed before it. At that time, Fr. Victor and Matushka were part of the ROCOR delegation to visit Georgia with the icon.

Responding to the many sincere words of congratulation being offered on the occasion of their 50th anniversary, Fr. Victor said that the best gift for him and Matushka was the present of two wonderworking icons. Fr. Victor further noted that the arrival of these two holy icons on this day could not have been planned, but was a gift of abundant mercy from the Lord and His Most Pure Mother. "The simultaneous visit to our parish by two great holy icons on the day of our family celebrations would not have been possible to organize ourselves," Fr. Victor underscored.

After the Slavonic Liturgy, Holy Protection Sisterhood prepared a bountiful luncheon for their guests. The icons remained in the church, where a stream of the faithful continued to pray, under the watch of responsible attendants.

In the later afternoon of August 29, both icons were taken to Fr. Victor’s home, where Bishop Nicholas served a thanksgiving moleben before them, after which Fr. Victor and Matushka Maria received well-wishes from their guests.

On Monday, August 30, both wonderworking icons were taken to the Embassy of the Russian Federation, where Orthodox diplomats and employees awaited the opportunity to pray before them. Before Russia’s diplomatic representatives, Bishop Nicholas and Fr. Victor served a moleben and Akathist to the Most Holy Theotokos. Over the course of four hours, the Orthodox diplomats and their families approached to venerate the icon and be anointed with holy myrrh.

On Thursday, September 2, Fr. Nectarios departed with the Hawaiian Icon to Florida, to visit the church communities there.

The Orthodox faithful of Greater Washington will remember with gratitude the visitation of two great wonderworking icons, and hope that soon they will once again be able to see and venerate them.

In the meanwhile, the parishioners of St. John the Baptist Cathedral will begin to prepare for their pilgrimage to Holy Trinity Monastery in Jordanville, NY, at the end of October, in order to pray at the grave of Jose Muñoz-Cortes, the faithful guardian of the myrrh-streaming Montreal Iveron Icon of the Mother of God, who was tortured to death in 1997.

Glory to God for all things! 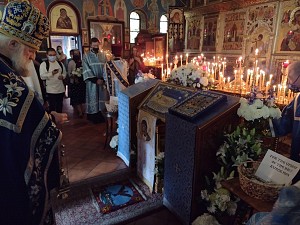