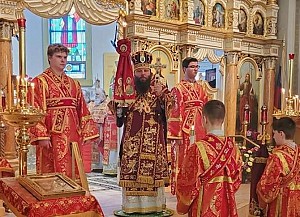 On Tuesday the 6th and Wednesday the 7th of July, the feast of the Nativity of the Holy Prophet, Forerunner, and Baptist of the Lord John, His Grace, Eastern American Diocesan vicar Bishop Nicholas of Manhattan, paid an archpastoral visit to St. John the Baptist Cathedral in Mayfield, PA, where he officiated the divine services in honor of the parish’s patronal feast day.

The following morning, before the start of Liturgy, Nicholas Pavuk, a seminarian of Holy Trinity Seminary in Jordanville, NY and native son of St. John Cathedral, was tonsured a reader. Cathedral altar servers John Sorochka and Iacov Dizik were granted the blessing to wear the orarion in recognition of their dedication and many years of service in the altar.

Concelebrating at Hierarchical Liturgy with Bishop Nicholas were the above-mentioned clergy, along with Deacon Paul Siewers (cleric of St. John the Wonderworker Mission).

Upon conclusion of Liturgy, a moleben was sung to the Most Holy Theotokos and St. John the Baptist. His Grace addressed the gathered faithful with words of inspiration and encouragement. He also expressed words of congratulation from Metropolitan Hilarion to the parish on its feast day. Bishop Nicholas also congratulated Fr. John on his namesday, Deacons Dimitri Krenitsky and Michael Pavuk on their anniversaries of ordination to the diaconate, and to the newly tonsured Reader Nicholas and altar servers John and Iacov.

After the services, there was a festal meal prepared for the clergy, their families, and the choir, where interaction with the diocesan vicar continued. 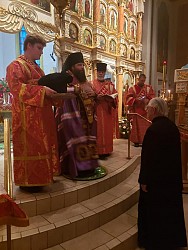