New York City: Feast of the Dormition of the Most Holy Theotokos celebrated in Synodal Cathedral 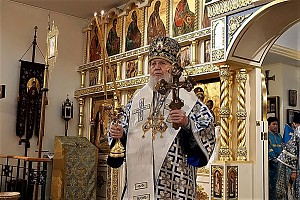 On Thursday the 27th and Friday the 28th of August, the great feast of the Dormition of the Most Holy Theotokos, Metropolitan Hilarion of Eastern America & New York officiated the All-Night Vigil and celebrated Divine Liturgy in the Synodal Cathedral of the Sign in New York City. Concelebrating at Liturgy was Archbishop Gabriel of Montreal & Canada, while cathedral clerics served alongside His Eminence at both services: dean Archpriest Andrei Sommer, Archpriest Edward Chervinsky, Archpriest Serafim Gan (chancellor of the ROCOR Synod of Bishops), Protodeacon Nicolas Mokhoff, and Hierodeacon Panteleimon (Jigalin). The choir sang under the direction of Protodeacon Vadim Gan.

Parishioners gathered to pray on the feast day and venerate the Shroud of the Mother of God, embroider in St. Petersburg and presented as a gift to the cathedral several years ago. Many confessed their sins and communed of Christ’s Holy Mysteries.

Upon completion of Liturgy, Archbishop Gabriel addressed the faithful with a sermon, in which he said, in part:

"In our Church, we know that there also exists, in addition to Holy Scriptures, Holy Tradition ‒ that is, what was passed down by word of mouth from the time of the Apostles. And we know that in Holy Scripture and the Acts of the Apostles, relatively little is said about the Most Holy Theotokos. Some of the Holy Fathers maintain that this could be in accordance with the modesty and humility of the Mother of God. But Tradition tells us that, after the Ascension of the Lord, the Most Holy Theotokos, in accordance with His will, came under the guardianship of the Apostle and Evangelist John the Theologian, and while he was away would live with his parents not far from the Mount of Olives. When persecutions arose against Christians in the first century, the Most Holy Theotokos accompanied the Apostle John in his preaching in Ephesus. She also visited the island of Cyprus, where the local bishop was St. Lazarus, whom the Lord had raised from the dead after four days in the tomb. She also visited Mount Athos, and promised her blessing and protection over the Holy Mountain.

"Not long before her dormition, the Most Holy Theotokos returned to Jerusalem, where should would frequent the Lord’s Tomb. On that spot, the Archangel Gabriel appeared to her, whom she no longer feared and whose appearance no longer astounded her. He appeared to her now for the last time, to announce to her her approaching repose. And she not only was not sorrowful, but rather rejoiced, for the moment had some when she would once more be reunited with her Divine Son.

"Tradition tells us that the Apostles, who were scattered to the ends of the earth preaching the Gospel fo Christ, were miraculously transported to Jerusalem, in order to bid farewell to the Mother of God. Only the Apostle Thomas could not be with them. Christ Himself, appearing in all His glory, took her soul, in order to accompany it into the Heavenly Kingdom.

"After the dormition of the Most Holy Theotokos, a procession was held to Gethsemane, where they wished to bury her. The Jews were unhappy about this procession, and one of them wanted to upset the coffin; instead, however, his hands were severed by miraculous means, only to be restored after his total repentance. He himself became a zealous Christian.

"Three days after the burial, the Apostle Thomas arrived, as well. Sorrowing, he asked that the grave of the Most Holy Theotokos be opened, but her body was not found within, only the burial clothes. The Lord had raised up her precious body and taken it into the Heavenly Kingdom."

Archbishop Gabriel called on the faithful not to treat death as something terrible, and not to fall into despair, but to look at our earthly life as a bridge to life eternal.

Metropolitan Hilarion greeted the clergy and faithful with the great feast, and wished them all the aid of the Most Holy Theotokos. He also congratulated Lubov S. Gerasimovich, one of the oldest parishioners of the cathedral, on the occasion of her 94th birthday, after which the Protodeacon intoned the Polychronion. 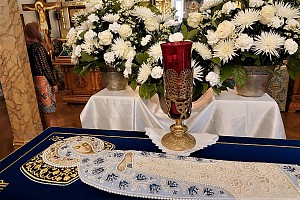 New York City: Feast of the Dormition of the Most Holy Theotokos celebrated in Synodal Cathedral - 08/28/20