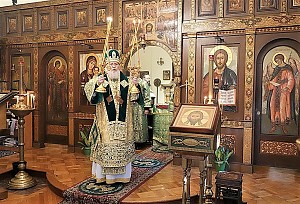 Every year on July 18, the English mission parish at the Synodal Headquarters in New York City celebrates its patronal feast day on the memorial of the finding of the holy relics of Venerable Sergius of Radonezh. On that day, the parish also commemorates the man in whose honor it was named ‒ Serge Yakovlevich Semenenko, a benefactor thanks to whose generosity the Synod of Bishops of the Russian Orthodox Church Outside of Russia received a large building in Upper Manhattan in 1958 for the needs of the Church and her worshippers. Within the building, two churches were established ‒ dedicated to the Icon of the Mother of God "of the Sign" on the second floor, and to Venerable Sergius on the first. The Cathedral of the Sign became the home of the Kursk Root Icon of the Most Holy Theotokos, while residing in St. Sergius Chapel is the wonderworking icon of the Mother of God "Joy of All Who Sorrow," brought to New York City by Metropolitan Philaret (Voznesensky) in 1965.

On Saturday, July 18, Metropolitan Hilarion of Eastern America & New York celebrated the festal Divine Liturgy, co-served by the dean of the Cathedral of the Sign, Archpriest Andrei Sommer; the rector of the English Mission, Abbot Zosimas (Krampis); and Hierodeacon Panteleimon (Jigalin). The service was sung in English by the parish choir.

On this important day for the parish, most of the parishioners confessed and communed of Christ’s Holy Mysteries. For those who could not attend church, St. Sergius Church has been offering live-streams of the daily services online.

Upon completion of Liturgy, Metropolitan Hilarion congratulated the clergy and faithful with the feast and spoke about the life of Venerable Sergius, who built a monastery dedicated to the Holy Trinity not far from Moscow, which would become the very spiritual center of Russia. Later, with his blessing, the saint’s disciples spread monasticism throughout the north of the country, where they also founded many monasteries. His Eminence called on the faithful to turn to the venerable elder in their prayers and to emulate his example in faith and piety.

The following day, July 19, the 6th Sunday after Pentecost, when the Holy Church celebrates the Synaxis of the Saints of Radonezh, Metropolitan Hilarion celebrated Liturgy in the Synodal Cathedral of the Sign, co-served by Fr. Andrei, cathedral Protodeacon Nicolas Mokhoff, and Protodeacon Serge Arlievsky (cleric of Holy Dormition Convent "Novo-Diveevo" in Nanuet, NY). 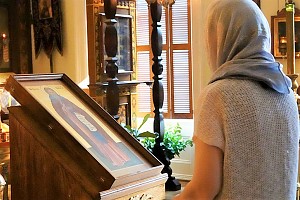