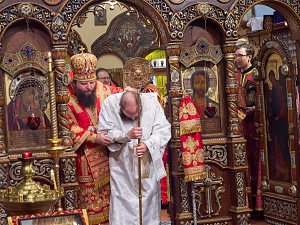 On Tuesday, September 27, the great feast of the Exaltation of the Cross of the Lord, Metropolitan Nicholas of Eastern America & New York paid an archpastoral visit to Holy Virgin Intercession Church in Glen Cove, NY, where he celebrated the festal Divine Liturgy. This marked his first visit to the parish as First Hierarch.

In the church narthex, warden Vladimir I. Mikhailichenko greeted the First Hierarch of the Russian Church Abroad with bread and salt. The rector, Archpriest Alexandre Antchoutine, greeted His Eminence, assured him of the constant prayers of the church’s clergy and parishioners, wishing him God’s unceasing aid in the bearing of his Primatial cross, and likewise entreated the Metropolitan’s holy prayers.

Prior to the start of Liturgy, Fr. Alexandre presented the First Hierarch a gift on behalf of the parish: a white klobuk and blue metropolitan’s mantle, sewn by craftsmen in Moscow.

Concelebrating with His Eminence at Liturgy were:

Parishioners gathered to venerate the Cross and to pray at the divine services; most of them communed of Christ’s Holy Mysteries.

Upon completion of Liturgy, Metropolitan Nicholas delivered a sermon on the feast, reminding the faithful that each must bear his cross with humility.

The protodeacon intoned the Polychronion for His Holiness, Patriarch Kyrill, Metropolitan Nicholas, the clergy, parishioners, and the newly ordained Deacon Andrei.

The parish sisterhood organized a festal luncheon for the clergy and faithful, during which words of congratulation and well-wishes were offered. The people did not disperse for a long time, taking advantage of the opportunity to speak with their First Hierarch, the clergy, and one another. 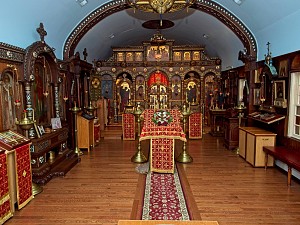