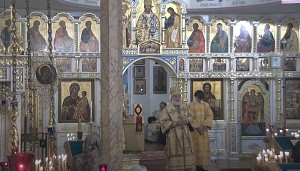 On August 7, the 8th Sunday after Pentecost and the feast of the Righteous Anna, mother of the Most Holy Theotokos, Archbishop Gabriel of Montreal & Canada celebrated Divine Liturgy in the Synodal Cathedral of the Sign in New York City. Concelebrating with His Eminence were cathedral dean Archpriest Andrei Sommer and Synodal Protodeacon Nicolas Mokhoff.

Singing at the divine services was the Synodal choir, under the direction of conductor Vadim S. Gan, which sang several pieces by composer B.M. Ledkovsky.

Cathedral parishioners who came to pray at the services communed of Christ’s Holy Mysteries.

Upon completion of Liturgy, Archbishop Gabriel addressed those gathered with a sermon on the Gospel reading on the feeding of the five thousand with five loaves:

"The Holy Fathers tell us that this was, as it were, a supper that the Lord performed, which served as a prototype of that last Supper, which He later performed in the midst of His disciples, and which He identified as His Body and His Blood, and by which we are united to Christ to this day when we commune of Christ’s Holy Mysteries ‒ not only in a spiritual sense, but also bodily. We are united with Christ, and that is why it is so necessary and so important to commune not once or twice a year, as some do, but as often as possible; and, before this, to confess our sins and be spiritually renewed, cleansed, and to receive Christ’s Body and Blood, to which we are called. This will help to prepare our souls for eternity."

His Eminence also reminded the faithful of the feast of St. Anna, who after many sorrows and the prayers of herself and her husband Joachim, in steeped old age became the mother of the Most Holy Theotokos. He called on them to pray to Righteous Anna and the Mother of God to help us on our path to salvation. He also congratulated the women named Anna who were celebrating their namesday.

The clergy and faithful then gathered in the cathedral hall for a traditional luncheon.