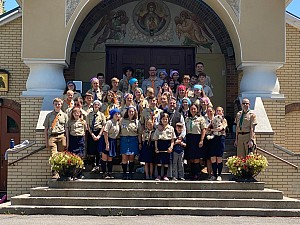 This July, the New York "Tsarskoe Selo" Chapter of St. George Pathfinders of America (SGPA) held its 74th summer camp for Russian Orthodox youth scouts on its territory in the foothills of the Adirondack Mountains. The three-week camp featured a program rich in theoretical as well as practical matters, including classes in Russian History, Scouting, and the Law of God, as well as hands-on instruction in scouting basics such as orienteering, campfires, knots, and other lessons.

On July 16-17, the feast of the Holy Royal Martyrs, the camp was delighted to welcome Bishop Nicholas of Manhattan. His Grace officiated All-Night Vigil and celebrated Divine Liturgy, co-served by the camp’s spiritual counselor Priest Andrei Podymow and Protodeacon Sergei Shoomiloff (cleric of Our Lady of Kazan Church in Newark, NJ). The open-air surroundings of the camp’s Great Martyr George Chapel were filled with the joyful singing of the choir, comprised of the camp’s scouts, under the capable direction of Valentina Shatalova.

On Saturday evening, His Grace joined St. George Pathfinders in their annual Remembrance of the Fallen Faithful (in Russian "DPV") ceremony, which this year added the names of the recently reposed Metropolitan Hilarion of blessed memory and Protodeacon Nicholas Lukianov, among several others, to the list of scout leaders and others who hold a special place in the history of the Organization. Later, Bishop Nicholas sat with the youth at a campfire, sharing his thoughts on faith, love, and humility as he spoke to the assembled group about the life of the Holy Royal New Martyrs. The next day, after Liturgy, he attended the flag raising ceremony and visited the camp’s lake house before departing.

The scouts enjoyed many exciting experiences during the three-week camp session, including an overnight hike on the camp’s 300+ acre territory, a trek up Mount Hadley, and a pilgrimage to Holy Trinity Monastery in Jordanville, NY, where they venerated the relics of their patron saint, the Holy Great Martyr George, visited the Russian History Museum, and spent time touring the monastery grounds.

For more information about the New York chapter of SGPA, feel free to reach out Scoutmaster Gregorii Galitzine at ggalitzine@gmail.com. 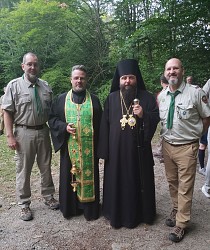