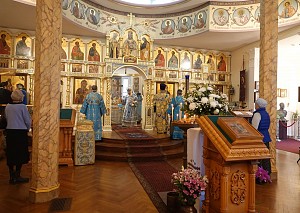 In the Synodal Cathedral of the Sign in New York City, the clergy and faithful prayerfully celebrated the great feast of the Entry into the Temple of the Most Holy Theotokos.

The Synodal choir sang prayerfully under the direction of conductor Vadim S. Gan. A multitude of parishioners prayed at Divine Liturgy, many of whom communed of Christ’s Holy Mysteries.

Upon completion of Liturgy, Archbishop Gabriel addressed the faithful with a sermon on the feast of the Entry into the Temple of the Most Holy Theotokos. Archbishop Gabriel noted that the event honored by this feast day is not described in the Gospel, but Holy Tradition tells us that the parents of the Virgin Mary – the Righteous Joachim and Anna – were unable for many years to bear children, which was a cause of great sorrow to them. God heard their prayers, and despite their advanced age, informed them through the Archangel Gabriel that they would bear a child, the holy Vessel, through whom God would enter the world.

"They gave a promise that if they would have a child, they would dedicate him (or her) to God. This is the event we celebrate today: how they brought their girl at three years of age to the Old Testament Temple, and the High Priest, led by the Holy Spirit, brought her into the Holy of Holies, a place which he himself could enter only once a year.

"In the Temple, the young Virgin occupied herself with reading and working by hand, preparing herself to a higher service, although she did not expect that she would become the chosen one of God and would give birth to the Savior of the word."

His Eminence reminded those present that we see in this an instruction from God: how important it is for all of us to abide in the temple, the church, but "it is especially important to instill a love toward the church in our children and grandchildren, because this is so necessary and so valuable, for them to become acquainted to the church from an early age: to the smell of incense, to the icons, to all of the holy things in the church , so that they will form a firm spiritual foundation on which they can then construct their whole lives." 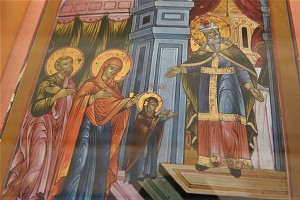