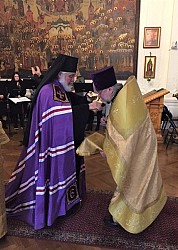 The Synodal choir sang prayerfully under the direction of conductor Vadim S. Gan. A multitude of parishioners prayed at Divine Liturgy, many of whom communed of Christ’s Holy Mysteries.

Upon completion of Liturgy, Archbishop Gabriel delivered a sermon on the Sunday’s Gospel reading, regarding the healing of the Gadarene demoniac.

"When the Lord approached this man, the evil spirits, sensing the proximity of the Lord, asked Him to send them into a herd of swine, feeding nearby. When the Lord asked their name, they answered "Legion," that is, a multitude of demons had possessed this person. And when these demons had entered into the swine, they ran down a steep place into the lake and drowned; the healed man, meanwhile, whom the people had feared because of his visage and behavior, became fully tranquil and meek, and humbly sat at the Savior’s feet. But the people, who had been raising pigs, unclean animals, in violation of the Jewish laws, rather than rejoice, asked the Lord to leave them."

Archbishop Gabriel noted that, in Biblical times, such a thing as demonic possession was sufficiently widespread, but it would be a mistaken to think that it no longer exists in our time. "We need but take a newspaper or listen to the news, and we can be convinced that there is even more demonic possession today than in that world. But modern science does not accept such a thing, saying that these people are mentally ill, but not possessed. But if a man departs far enough from God and from an understanding of the correct Christian life, then an unclean spirit can enter into him, but we do not always understand this."

His Eminence also reminded the faithful that people can be lured into possession, more often than not, by pride, self-love, and vanity, and called on them to remain within the fold of the Church, cleansing themselves as often as possible through the sacrament of repentance, protecting themselves with the Cross and prayer, and communing of Christ’s Holy Mysteries.

The parish sisterhood organized delicious luncheon for all in the church hall.