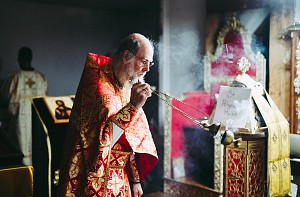 On Saturday the 2nd and Sunday the 3rd of October, the community of St. Polycarp of Smyrna Church in Sanford, ME held the one-year anniversary celebrations of the establishment of the parish, which is now approaching 40 members. The mission was established with the blessing of His Eminence Hilarion, Metropolitan of Eastern America & New York, on September 15, 2020.

Upon conclusion of Liturgy, in honor of the Afterfeast of the Exaltation, a short moleben was served before the Precious and Life-Creating Cross of the Lord. The clergy and faithful the venerated the Cross, along with relics of the True Cross, the Holy Apostle Nicanor of the Seventy, Venerable Hilarion the Great (+387), Venerable Benedict of Nursia (+547), and the Holy Hieromartyr Gumesindus of Cordoba (+852).

In addition to the current parishioners, there are also three catechumens and an inquirer, and Fr. Photius noted with joy that two more baptisms are expected before the end of the year. Please pray for them on their journey to Holy Orthodoxy!

Other changes and additions made over the course of the past year include expanding the altar space, updating the roof system, laying down colored shingles, putting in heating and cooling systems along with drywall and painting (in preparation for iconographic frescoes), purchasing or receiving a large number of church supplies (including a number of supplies from four OCA churches closing in the Diocese of Western Pennsylvania), most significantly the original altar table from Nativity of the Theotokos Church, founded in Masontown, PA in 1914 under Metropolitan Platon (Rozhdestvensky; +1934).

Finally, the parish has launched a new website, www.stpolycarp.net, which local Orthodox Christians and those interested in the Orthodox Faith are encouraged to visit.

After Liturgy, all were invited to a festive pork roast, where interaction between the clergy and parishioners continued. 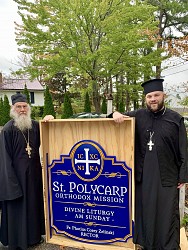