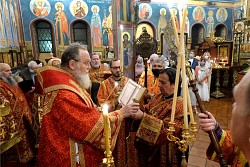 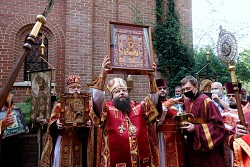 On Friday the 10th and Saturday the 11th of September, parishioners of St. John the Baptist Cathedral in the U.S. capital prayerfully marked their 72nd patronal feast day. The capital’s parish community was founded by the Holy Hierarch John of Shanghai when he visited Washington in 1949 to convince American authorities to evacuate Russian refugees stranded in difficult circumstances on the Philippine island of Tubabao. Officiating the celebrations were His Eminence, Metropolitan Hilarion, First Hierarch of the Russian Orthodox Church Outside of Russia, and His Grace Nicholas, Bishop of Manhattan. Accompanying the hierarchs was the Protectress of the Russian Diaspora – the Kursk Root Icon of the Mother of God.

The service was held in two languages – Church Slavonic and English. The two cathedral choirs sang wonderfully. Litia was served outdoors, in procession around the cathedral. The service was, as always, broadcast on our YouTube channel, which gave many of the faithful the opportunity to take part in the shared prayer of the Church, even at a distance.

The following day, Bishop Nicholas celebrated Divine Liturgy. Metropolitan Hilarion prayed in the altar and communed with the serving clergy. Concelebrating with His Grace were the above-mentioned clerics.

During the Little Entrance (as the Hours had been read prior to the greeting of the bishop), oraria were awarded to the conductor of the cathedral’s English choir, Reader Konstantine Ogora, and the eminent acolyte Stephan Phillips, who as a child in Shanghai had served under St. John (Maximovitch).

The patronal feast now coincides with a tragic date – that of the before unimaginable attack on the United States by al Qaeda terrorists, the 20th anniversary of which took place this year. A litany for the departed was intoned during Liturgy, commemorating those who died in New York, Washington, and Pennsylvania.

A great number of worshippers communed of Christ’s Holy Mysteries.

Upon conclusion of the service, the epistle of His Holiness Kyrill, Patriarch of Moscow & All Russia, for Temperance Day, which also takes place in September 11, was read aloud.

After Liturgy and a moleben with procession, the hierarchs and rector exchanged greetings.

The rector’s spouse, Matushka Maria Potapov, was presented with a Synodal gramota for her many years of benevolent service with homeless and needy Americans and Russians.

Holy Protection Sisterhood, led by Marina Zacharin, organized a festal (lenten) luncheon in the church hall, as well as in a tent behind the church. The Kurk Icon remained in the church, where many continued to offer up their prayers before the wonderworking image.

We would have wished to spend more time interacting with our hierarchs and praying before the Kursk Icon, but they had to depart with haste for the All-Night Vigil at St. Alexander Nevsky Cathedral in Howell, NJ, which was celebrating its own patronal feast on September 11-12, as well as the 85th anniversary of the founding of its parish and the 800th anniversary of the birth of the Holy Right-Believing Great Prince Alexander Nevsky.

Glory to God for granting us these grace-filled days! 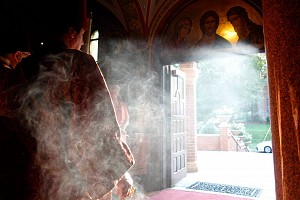