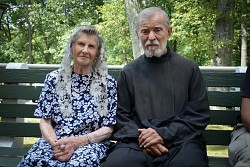 On Thursday, May 27, Matushka Claudia Burbelo, widow of Archdeacon Eugene Burbelo (+2017) reposed peacefully in the Lord. She was 87 years old.

Matushka Claudia was born in Nice, France on October 28, 1933, where her family had emigrated from St. Petersburg, Russia. They moved to Paris, where she finished the Lycée and in 1952 Claudia, along with her parents and brother, came to America. She attended Hunter College in New York City and worked at the New York Public Library.

She married her loving husband, the future Synodal Archdeacon Eugene Burbelo, in 1955 and raised their four children in their Freehold, NJ home. Claudia was very dedicated to the Church, singing in the choir, being a member of the sisterhood, and teaching in St. Alexander Nevsky Russian School in Howell, NJ. After raising her children, she worked as a teacher’s assistant for children with special needs and as a Russian translator for the Monmouth County Court System. A woman of deep faith and compassion, she dedicated her life to helping others. 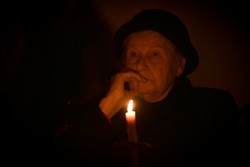 Matushka Claudia was predeceased by Fr. Eugene and their infant son, Alexander (1959). She is survived by her brother, Br. Seraphim of Canada; her children Marie Dermond and her husband Bill of Ewing, NJ; Nicholas Burbelo and his wife Natasha of Brielle, NJ; Andrew Burbelo and his wife Natalie of Bel Air, MD; and Catherine Jarostchuk and her husband Basil of Red Bank, NJ. She also leaves behind her loving grandchildren Alexandra, Nicole, Christina, Alec, Veronica, Kira, John, Michael and two great grandchildren.

A panihida will be held on Saturday, May 29, at 7:30 PM at St. Alexander Nevsky Cathedral in Howell. The funeral will be held there on Monday, May 31, at 11:00 AM, followed by the interment at Holy Dormition Convent "Novo-Diveevo" in Nanuet, NY.

Memory Eternal to the newly reposed handmaid of God Claudia