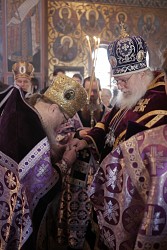 After the first week of Great Lent, one of strict fasting and long and penitential services, the brethren of Holy Trinity Monastery in Jordanville, NY celebrated the Sunday of Orthodoxy, the triumph over the heresy of iconoclasm. Celebrating Divine Liturgy on Sunday morning was His Grace Luke, Bishop of Syracuse, abbot of the monastery and rector of Holy Trinity Seminary, co-served by the monastery clergy.

At the Little Entrance, with the blessing of the Synod of Bishops, His Grace elevated monastery cleric Abbot Theophylact (Clapper-DeWell) to the rank of archimandrite.

Liturgy was followed by the Rite of Orthodoxy. Bishop Luke and the clergy gathered in the middle of Holy Trinity Cathedral, and Protodeacon Peter Markevich intoned the proclamations of the Rite, including the anathemas, each one followed by the chanting of "Anathema!", first by the clergy followed by the choir. The anathemas included are those that were used in prerevolutionary Russia, as well as those proclaimed more recently by the Church, against those heresies which afflict the Church in modern times.