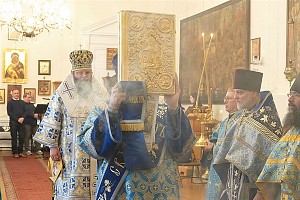 The Holy Equal-of-the-Apostles Nicholas of Japan always remembered the counsel given him at the start of his missionary work by the Holy Hierarch Innocent of Alaska: "First, love those to whom you wish to talk about Christ. Then do what you can to make them love you. Then talk to them about Christ." On February 16, the Holy Church celebrates the memory of this saint, who was virtually our contemporary, and who brought a multitude of pagans to Christ far from his homeland. Observing his namesday was Bishop Nicholas of Manhattan, vicar of the Eastern American Diocese, who celebrated Divine Liturgy in the Synodal Cathedral of the Sign in New York City.

The Synodal choir sang beautifully under the direction of conductor Vadim S. Gan.

The Russian Orthodox Church in Russia glorified the Holy Hierarch Nicholas of Japan in 1970, while the Russian Church Abroad did so jointly with the Holy Hierarch Innocent of Alaska on January 29-30, 1994. Services for the glorification were held on the same day in Joy of All Who Sorrow Cathedral in San Francisco, officiated by Metropolitan Vitaly (Ustinov), and in St. John the Baptist Cathedral in Mayfield, PA, officiated by Bishop Hilarion of Manhattan (now First Hierarch of ROCOR).

Cathedral parishioners and faithful from nearby churches who gathered to pray at Liturgy and congratulate Bishop Nicholas prayed before the wonderworking Kursk Root Icon of the Mother of God and before an icon of the Holy Hierarch Nicholas of Japan, enlightener of the "land of the rising sun." As Liturgy was being celebrated, the sky, which had been covered with thick clouds, opened up and was brightened by the shining sun, something many parishioners noted.

Upon completion of the service, a moleben was served to St. Nicholas of Japan.

Metropolitan Hilarion congratulated Bishop Nicholas on the occasion of his namesday, thanked him for his labors, and wished him firm health, as well as for his Heavenly patron to pray and strengthen him in his hierarchal service for many years. The protodeacon then intoned the Polychronion for His Grace.

Bishop Nicholas thanked Metropolitan Hilarion for his warm words, instruction, and good example, as well as the cathedral parishioners who had gathered to pray at Liturgy, and asked them never to forget their archpastor in their daily prayers. 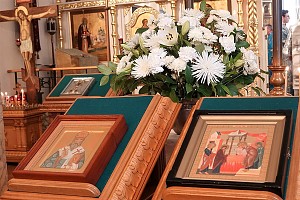