New York City: Feast of the Meeting of the Lord in Synodal Cathedral of the Sign 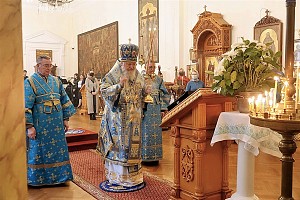 On Monday, February 15, the great feast of the Meeting of the Lord, which completes the Nativity cycle, Metropolitan Hilarion of Eastern America & New York, First Hierarch of the Russian Church Abroad, celebrated Divine Liturgy in the Synodal Cathedral of the Sign in New York City, co-served by Bishop Nicholas of Manhattan. Also concelebrating with His Eminence were cathedral clerics: dean Archpriest Andrei Sommer, Archpriest Edward Chervinsky, Protodeacon Nicolas Mokhoff, and Hierodeacon Panteleimon (Jigalin). The Synodal choir sang the service, under the direction of conductor Vadim S. Gan.

Of the festal Nativity cycle, which includes the Nativity of Christ, the Circumcision of the Lord, and the Theophany, the feast of the Meeting of the Lord is the most recent to be added, and has its own historic background. It began in 526, when during the reign of the Emperor Justinian, a terrible earthquake struck Antioch, killing many of the city’s inhabitants, while in 544, plague struck the city. According to tradition, during the plague, it was revealed to one pious Christian that the day of the Meeting of the Lord should be celebrated with the All-Night Vigil and a cross procession, after which, once this was accomplished, the epidemic ceased. And thus, since 544, the feast of the Meeting of the Lord joined the ranks of the Twelve Great Feasts.

The wonderworking Kursk Root Icon of the Mother of God was in the cathedral on this festal day, to the joy of the multitude of parishioners, who, despite its being a weekday, gathered to "meet Christ," as the Holy Church reminds us to do through this celebrated feast. Virtually all present confessed their sins and communed of Christ’s Holy Mysteries.

Upon completion of Liturgy, Metropolitan Hilarion greeted everyone with the great and radiant feast, and read aloud the address of His Holiness, Patriarch Kyrill (in Russian), on the occasion of Orthodox Youth Day. 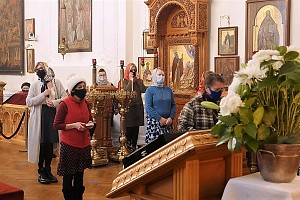 New York City: Feast of the Meeting of the Lord in Synodal Cathedral of the Sign - 02/15/21