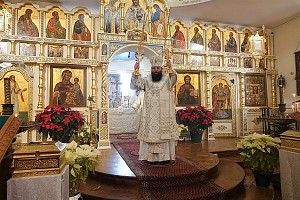 On January 24, the 33rd Sunday after Pentecost and the Sunday after Theophany, when the Holy Church also commemorated Venerable Theodosius the Cenobiarch, Bishop Nicholas of Manhattan celebrated Divine Liturgy in the Synodal Cathedral of the Sign in New York City.

In the days following the feast of Theophany, parishioners gathered in the cathedral to honor the memory of St. John the Baptist and to pray before the Kursk Root Icon of the Mother of God, who sanctified the feasts of the New Year with her presence. Most of those present confessed their sins and communed of Christ’s Holy Mysteries.

Upon completion of Liturgy, His Grace greeted everyone with the ongoing feast of Theophany, and expressed his spiritual joy that "the Creator of the world and Maker of light, the Almighty God, blessed us all and gave us the opportunity this year to prayerfully observe the feasts of Christ’s Nativity and the Lord’s Theophany in special circumstances."

His Grace reminded the people of the words of the Savior Himself, which they had heard during the service: "Repent: for the Kingdom of Heaven is at hand;" to bring forth repentance and renew their spiritual lives.

Bishop Nicholas also spoke briefly about Venerable Theodosius the Great, the Cenobiarch, who labored in the 5th and 6th centuries in the Palestinian desert. He settled in the cave where once the magi had rested after coming to the Infant Christ and presenting Him their gift. The venerable one founded a monastery became the founder of cenobitic (communal) monasticism, where the brethren would labor together. His Grace noted that not only monastics are called to this spiritual labor: those with families must also heed the words of the Lord regarding repentance, taking part in the Sacraments, saving their souls, and helping those in need find this salvific path.

Bishop Nicholas touched on the divine services of the coming week, and congratulated the upcoming namesday celebrants, who bear the names of the Holy Martyr Tatiana, the Equal-of-the-Apostles Nina, and Venerable Paul of Thebes and Anthony the Great. 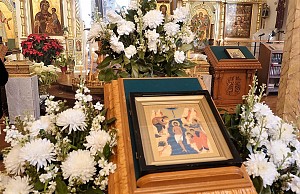