Following the Hours, prior to the start of Liturgy, Metropolitan Jonah performed the clothing of the novice Michael (Binyam Abeye) for the Monastery of St. Demetrios of Thessaloniki in Spotsylvania, VA, of which His Eminence is also the rector; tonsured Alexander (Alec) Dobbertin a reader and ordained Stylianos (Daren) Volpe a subdeacon, both for St. Tikhon Church; and tonsured Lazarus Sparandera a reader and then ordained him a subdeacon.

At Liturgy, after the Eucharistic Canon, the Metropolitan ordained Subdeacon Lazarus to the diaconate. The newly ordained Deacon Lazarus will fulfill his service at Christ the King Western Rite Church in Tullytown, PA.

The choir sang beautifully under the direction of Ms. Stephanie Yuschak.

Upon completion of the service, Metropolitan Jonah addressed the gathered faithful with a sermon on the Holy Apostle and Protomartyr Archdeacon Stephen (whose feast day it was), and the role of the diaconate. His Eminence also offered words of instruction and encouragement to the newly clothed, tonsured, and ordained.

After Liturgy, a bountiful festal luncheon was served in the parish hall. 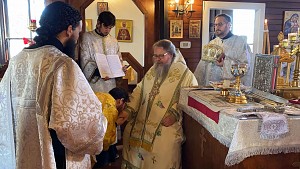