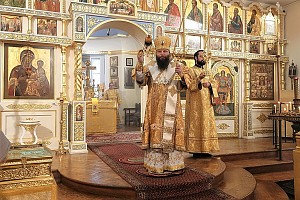 On October 18, the 19th Sunday after Pentecost and the date when the Holy Church honors the memory of the Holy Hierarchs of Moscow: Peter, Theognostus, Alexis, Cyprian, Photius, Jonah, Gerontius, Joasaph, Macarius, Philip, Job, Hermogenes, Tikhon, Peter, Philaret, Innocent, and Macarius, Bishop Nicholas of Manhattan celebrated Divine Liturgy in the Synodal Cathedral of the Sign in New York City.

The service took place under the aegis of the Protectress of the Russian Diaspora ‒ the wonderworking Kursk Root Icon of the Mother of God.

A multitude of parishioners prayed at Liturgy, most of whom received Christ’s Holy Mysteries.

Upon completion if Liturgy, His Grace greeted the clergy and faithful with the feast of the saints and of the Resurrection, and delivered a sermon on the day’s Gospel reading:

"Today we heard from the Gospel according to Luke, wherein the Lord offers us words so needed in our life: how now to live in the New Testament with Christ. These words are simple, but deep in meaning. The Lord very clearly commands that we act with people as we would want people to act with us: wishing them well, forgiving them, helping them and, most of all, loving our enemies. And the Lord concludes by saying, ‘Be ye therefore merciful, as your Father also is merciful.’

"God is the source of love, the source of our life, and by acting as Christ directs, we draw closer to God. We should not live for ourselves, but must live for God and for others. Many did not understand this new teaching of the New Testament, and condemned Christ, the result of which was the death of the Savior on the Cross.

"But Christ arose and lives with us, and His words are likewise alive: let us weep for our sins, rejoice in the Lord, love our neighbors, and at least try to forgive them, extending a hand of support."

Bishop Nicholas also noted the importance for today’s Orthodox Christians of the example set by the Holy Hierarchs of Moscow, who lived in various times throughout Russian history.

"Glorifying the hierarchs of Moscow today, we remember their prayers for their people, their land, and for one another. Before us is their icon, which depicts the Holy Hierarchs Peter, Alexis, Jonah, Philaret, Hermogenes, and Tikhon. But their Synaxis incudes other hierarchs, as well. The Holy Hierarch Peter, when he was appointed primate of the Russian Orthodox Church, relocated from Kiev to Vladimir and later to Moscow. From that point on, Moscow held great significance in our life and the life of the whole world. It is the beating heart of Orthodoxy. The Holy Hierarch Alexis, a renowned man of prayer, could make peace among people both in the state and in Church life. His relics now reside in Moscow’s Theophany Cathedral at Yelokhovo. The Holy Hierarch Jonah is also a special bishop for us, who introduced a new order, wherein the Russian Church would independently elect her primates. The Holy Hierarch Philip, a man of prayer, was martyred, suffering for the Orthodox Faith. The Patriarch Hermogenes led the Russian Church through the Time of Troubles, and by his prayer saved the Orthodox Faith, remaining for us to this very day an exemplary man of prayer. The Holy Confessor Patriarch Tikhon is especially close to us, as he was a bishop of America, visiting our city and other states, in the West and Alaska; he was elected to the Patriarchal See and uncompromisingly gave his life for Orthodoxy and his people.

"Today they lift up their prayers before God’s Throne for all Orthodox people, for this world, which is full of strife, and give us an example of love not only for one’s friends, but also for those whom we determine to be our enemies."

Bishop Nicholas called on the faithful to stand firm in faith and prayer, and to take to heart the living word of God, more relevant than ever in our day. 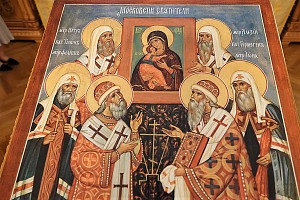