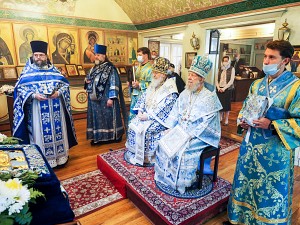 On Monday, September 21, the great feast of the Nativity of the Most Holy Theotokos, His Eminence Hilarion, Metropolitan of Eastern America & New York, First Hierarch of the Russian Church Abroad, paid an archpastoral visit to Nativity of the Mother of God Church at the New Kursk Root Hermitage in Mahopac, NY. There he celebrated Divine Liturgy, co-served by His Grace, Bishop Jerome, who lives and labors at the Hermitage.

This year, made unusual by pandemic conditions, the popular festivities featuring a multitude of guests and pilgrims had to be cancelled, and only a limited number of worshippers were permitted at the divine services on Sunday and Monday, observing all required safety measures. Nevertheless, the services proceeded triumphally and prayerfully.

The service was held under the aegis of the Protectress of the Russian Diaspora ‒ the wonderworking Kursk Root Icon of the Mother of God. The New Kursk Root Hermitage was founded by Bishop (after 1959 ‒ Archbishop) Seraphim (Ivanov) 70 years ago in 1950, as the first home of the wonderworking icon in the American land.

At the Little Entrance, Metropolitan Hilarion awarded Fr. George the right to wear the pectoral gold cross for his zealous service to the Holy Church. After the Eucharistic Canon, His Eminence ordained Subdeacon Konstantin Aleshin to the diaconate. The newly ordained Deacon Konstantin will fulfill his obedience at Nativity of the Mother of God Church.

A congratulatory letter arrived from Abbot Seraphim (Kotelnikov; deputy abbot) and the brethren of the Kursk Root Hermitage in Russia, which read, in part: "We sincerely congratulate you with the feast and the date of the finding of the wonderworking icon, which on this holy day abides at your habitation. We all join in singing you ‘Axios!!!’ May our Compassionate Lord strengthen you. A deep bow and congratulation to all."

At lunch, in honor of the feast and the jubilee, the parish presented Metropolitan Hilarion with a commemorative book, which in its 100 pages briefly chronicles the history of the Hermitage throughout the past seven decades, with photographs of various years, records from the Hermitage’s archives, and passages from the memoirs of those who lived in Mahopac throughout the years.

The commemorative book’s introduction explains its goals and tasks thus: "The years of the New Kursk Root Hermitage’s prime and glory gave way to years of quiet life in labors, prayer, and deprivation; this decline and threat of collapse gave way in turn to a new spiritual uplift and the resurrection of monastery life. In that time, the Soviet regime in Russia had collapsed, by God’s grace Orthodoxy had begun to bear its grace-filled fruit in the Russian land, and churches and monasteries were being restored, among them the Kursk Root Hermitage, with which the New Kursk Root Hermitage in Mahopac is so closely spiritually and prayerfully tied.

"Just as in Russia, so too in the U.S. are the remaining records, memoirs, surviving documents, and photographs being gathered together, and the history of this and many other holy places being recorded. At the same time, we ever more frequently hear the question: is all of this necessary? In a new century, who needs memoirs of a bygone era, faded photographs of long-departed people and places, old letters, and miraculously surviving documents and records? The answer is simple: we, all of the people, need this, in order to remember those who labored with prayer unto the glory of God, for the benefit of later generations; in order to learn from the examples of their lives and sacrificial service to God, Church, and people; in order for us and our children and grandchildren not to be some ‘rootless John Does,’ but to known our roots and our history, and to firmly cling to the Church. If we lose our Orthodoxy, as Metropolitan Anastassy (Gribanovsky) once said in his sermon at the New Kursk Root Hermitage in 1954, ‘we… will be as dust kicked up by the wind, and will be swallowed up, perhaps for all time, by the world around us.’ So, let us work together, unto the glory of God, preserving our heritage."

The parish is currently seeking funds and the opportunity to print the commemorative book for broad publication, and is appealing to all who might be connected in one way or another with the life of the Hermitage of visited Mahopac in the period of the 1950s-1990s to share photographs and personal memories of these years in Mahopac. Materials can be sent to Matushka Elizaveta Temidis by e-mail at elizavetat@gmail.com or at the below address:

As the festivities drew to a close on this sunny autumn day, everyone departed for home with impressions of the grace-filled service, and in a joyous mood after their prayerful and personal interactions. 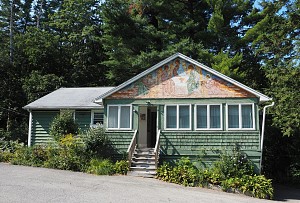