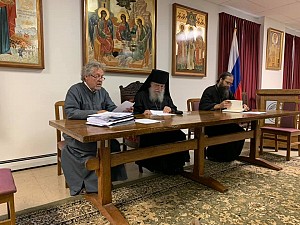 Holy Trinity Orthodox Seminary in Jordanville, NY, opened the 2020-21 academic year with a series of events, which took place during the first two weeks of September.

The majority of students arrived on campus by August 17; two weeks earlier than planned, to allow adequate time for any necessary two-week quarantines due to each student’s point of origin, and possible resultant required restrictions by the State of New York. Those not subject to quarantine assisted the brotherhood and seminary administration with various duties related to the timely opening of the fall semester.

After this period, orientation took place for new students on Monday, August 31, and for all students (new and returning) on Tuesday, September 1.

On Wednesday, September 5, hierarchal Divine Liturgy was celebrated and a moleben served by His Grace, Bishop Luke, rector of HTOS, to mark the beginning of the academic year. Following breakfast, the welcome included remarks and advice from Bishop Luke, as well as a ceremony wherein His Grace gives the blessing for new students to wear the cassock and the belt. Welcoming remarks were also given by seminary dean Dr. Nicolas Schidlovsky. The 4th annual convocation took place at 3:00 PM, at which each new student then had an opportunity to introduce themselves and to speak about their background, as well as what brought them to seminary in general, and led them to choose HTOS in Jordanville in particular.

Thursday, September 3 marked the first day of classes. The typical Labor Day Pilgrimage to the monastery did not take place this year. Students were treated to the annual welcome picnic with a barbeque on Monday (Labor Day), September 7. After the end of the usual class day on Tuesday, September 8, a job fair was held consisting of presentations on the available work study programs.

Since the close of last year’s academic year, many exciting changes have taken place with the faculty at the seminary. All of the promotions will be listed in a separate posting on the seminary website in the coming days.

The student body for the 2020-21 academic year includes the following 29 seminarians: