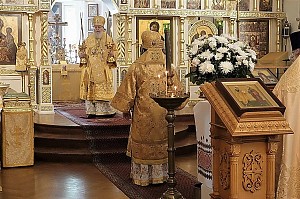 More and more parishioners are returning to the Synodal Cathedral of the Sign in New York City. Many new faces are visible in church, too, most of whom are youth. On Sunday, July 12, when the Holy Church celebrates the memory of the Holy Preëminent Apostles Peter and Paul, the cathedral was filled to the capacity currently permitted by municipal authorities, established following the lifting of quarantine measures in the city.

To the joy of the faithful, the service was held under the aegis of the wonderworking Kursk Root Icon of the Mother of God. The choir sang the Liturgy under the direction of Protodeacon Vadim Gan. Many parishioners confessed their sins and communed of Christ’s Holy Mysteries. The services were also broadcast online via live-stream for those who for the time being cannot be inattendance.

Upon completion of Liturgy, Metropolitan Hilarion greeted the clergy and faithful with the feast of Sts. Peter and Paul, and congratulated the namesday celebrants. His Eminence spoke briefly about the lives of the Holy Preëminent Apostles, and called on parishioners to turn to them in their prayers, follow their example, and in their lives to be zealous in the Faith and faithful to Christ.

The archpastors resumed their traditional interaction with parishioners after the service. 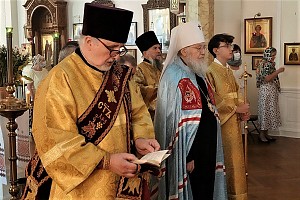