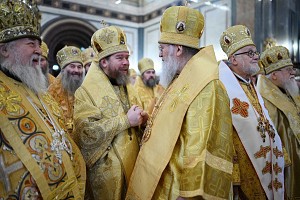 Singing at Divine Liturgy was the Patriarchal Choir of Christ the Savior Cathedral (conductor I.B. Tolkachev) and the brotherhood choir of the Holy Trinity-St. Sergius Lavra (conductor Archimandrite Gleb (Kozhevnikov)).

His Beatitude Onufry, Metropolitan of Kiev & All Ukraine, read aloud a congratulatory address from the members of the Holy Synod of the Russian Orthodox Church to Patriarch Kyrill, then presenting the His Holiness with gifts from the Holy Synod – a hierarchal mantle and a bouquet of flowers.

Patriarch Kyrill then addressed all those present at the service with a Primatial sermon.

Materials from the official website of the Patriarch of Moscow & All Russia.
Translation by the Media Office of the Eastern American Diocese. 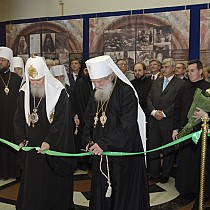